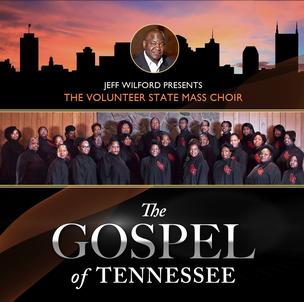 On A Mission To Share The Gospel of Tennessee

Nashville, TN -- Tennessee is a state exemplified by majestic Blue Ridge and Appalachian Mountains, soaked in southern traditional charm, and historically rooted in Blues, Country, and Gospel music which has birthed legends and established trends in these beloved genres of music.  Setting out to continue the appreciation for and acknowledgment of the deep roots of gospel music throughout this southeastern state and throughout the entire country is The Volunteer State Mass Choir.  With Nashville as their hub, The Volunteer State Mass Choir (VSMC) is on a mission to spread The Gospel Of Tennessee!

The VSMC was formed in 2006 by musician and Christian retail store owner Jeff Wilford.  “I started this choir with the mission to bring vocalist and musicians from across the state together and to preserve the gospel choir artistry and legacy specifically here in TN,”  says Wilfod.  “This choir was also established to give individuals in the state of TN an opportunity to reach the masses with their gifts.”

The VSMC is made up of over forty members ranging in age from 19-65 with a sincere family oriented community of fellowship.  Members span from across the state – from the west of Memphis to the upper east of Knoxville.  The dedicated and ministry driven choir released their first recorded project THE GOSPEL OF TENNESSEE in June of 2015 and have been touring covering the state’s Grand Divisions: East, Middle and West.

Wilford and his assembly of singers and musicians recently performed at several high profile events during the annual Stellar Gospel Music Awards week in Las Vegas, NV.  They have returned home to a busy schedule in promoting and sharing THE GOSPEL OF TENNESSEE.  The choir will be covering the state this spring and will embark on ministering throughout the East Coast and Mid-Atlantic region this summer including an appearance on Atlanta Live TV on April 29th.   THE GOSPEL OF TENNESSEE is distributed nationally by New Day Christian Distributors and is available on all digital music outlets.